In the last chapter, we made a complete specification of the duplicate checker, adding a property to our implementation. By using initial states, we can check all 4-digit lists of single digits. If we wanted to be more thorough, we could check a wider range of inputs, for example S == 1..100. By my estimate, this would kick the number of found states from 70,000 to over 500,000,000. That would take a lot more time to check! If we were writing this as a “real” spec, we’d want to do most of our writing with a smaller value of S, like 1..10, so we can get faster feedback from the model checker. It’s only when we’ve shaken out the obvious issues that we’d switch a large value of S, like 1..100.

This means we don’t want S to be a hardcoded value in the spec. It should instead be something we can dynamically pick per model run. Think of how, in a programming language, you have command line flags for passing in arguments. In TLA+, values that can be configured per model run are called “Constants”.1 Let’s make S a constant:

You can put several constants on the same line; when we make the length configurable (in the next chapter), we’ll write CONSTANT S, Length. If we now try to run our spec, the toolbox will say that we haven’t defined the constant S:

We do that over here:

Which opens this box: 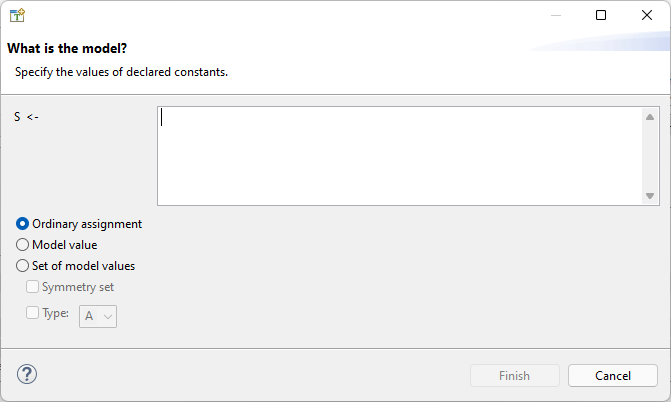 There are three options for constants: ordinary assignments, model values, and sets of model values. We’ll talk about the other two later, for now let’s just look at ordinary assignments. This lets you assign any valid TLA+ expression to the constant. Since showing screenshots of every single assignment is annoying, I’ll write S <- 1..10 to mean “we do an ordinary assignment of 1..10 to S.” Now we can make separate models with a small S for iterative development and one with a large S for final testing.

It’s good practice to use constants in your TLA+ specs. To keep the examples simple, though, I’ll hardcode more values than I normally would.

We can rule these pathological values out with the ASSUME keyword. ASSUME expressions are checks to make sure we put in correct constants.

The expression inside an ASSUME can depend on operators and constants, but not variables. The ASSUME is checked before the model run even starts. If we try running the spec with S <- {1}, we get an error:

If you have a spec with constants, you should put constraining assumptions on them. In addition to preventing errors, they also help readers of the spec understand what the constants are supposed to be.

That takes care of ordinary assignments, what about “model values”? Model values are a special type of value in TLA+. A model value has no operations and can only be tested for equality, and is only equal to itself. IE

What you can do instead is define a new constant, like NULL or NotYetAccessed, and set it to a model value. Then you can do IF last_access_time = NULL, which will be false if the value is already a number. Similarly, you can add them to sets that already have a elements. Model values are incredibly useful as sentinel and placeholder values in organizing larger specs.

Once you have a model value, you can use it in ordinary assignments. For example:

We can also assign constants to sets of model values. Put it in as a normal set, but without quotes.

Sets of model values will become extremely useful when we start modeling concurrency, but there’s still one cool trick we can do with them right now. If you run the model with that value of S, you will get 4,375 states total— the same as if you did S <- 1..5. But notice this other option below the “set of model values” bar: 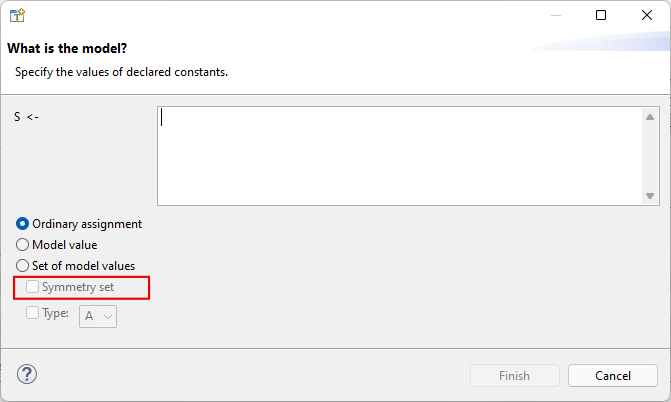 “Symmetry set” is a special TLC optimization. By making S a symmetry set, the number of states drops to only 715. Symmetry sets are a very powerful optimization technique!

To illustrate what’s going on, let’s look at four possible values for seq:

Symmetry sets don’t always make the spec run faster. TLC has some overhead in figuring out all the symmetries; with very large sets, that can take longer than actually checking the model. On my computer, checking duplicates with an 8-element symmetry set takes two minutes longer than checking it with a regular model set.

You can also use constants to control the flow of your spec. When working on complicated specs, I sometimes like to make a DEBUG constant:

Another thing you can do is restrict multiple starting states with DEBUG:

This is different from how we use constant in programming languages, as well as other specification languages. AFAICT it’s an idiosyncracy of TLA+. Constants as in “values that never change” are just 0-arity operators.